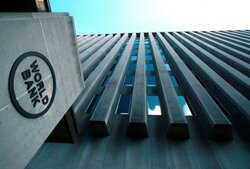 The World Bank, in its latest Global Economic Prospects (GEP) report released on Tuesday, sees the Iranian economy growing by 2.2 percent in 2023, despite a sharp, long-lasting slowdown in the global economy.

“Our latest forecasts indicate a sharp, long-lasting slowdown, with global growth declining to 1.7 percent in 2023 from 3.0 percent expected just six months ago,” the report reads.

Following the global economy, the Islamic Republic of Iran’s economic growth in 2023 has also been revised down by 0.5 percentage points, to 2.2 percent, on account of slower growth in key trading partners.

Domestic demand in Iran is also likely to be curbed by the effects of high inflation on real incomes, which is expected to average 44 percent in 2023/24, the report stated.

Based on the report, the deterioration in the global economy is broad-based in virtually all regions of the world, and per-capita income growth will be slower than it was during the decade before COVID-19.

According to the forecast of the World Bank, developed countries will approach economic stagnation in 2023 and will grow by only 0.5 percent this year.

The economic growth of the Eurozone which has decreased from 5.3 percent in 2021 to 3.3 percent in 2022, is also expected to fall to zero this year as the region enters recession in 2023.

World Bank, in its latest economic report on the MENA region, published in October 2022, forecasted the Iranian economy to grow by 2.9 percent in 2022 and 2.7 percent in 2023.

“Iran’s GDP is forecast to grow 2.9 percent in 2022. In 2023, the average growth for developing oil exporters is expected to fall back to 2.7 percent,” the bank said in the report.

The bank expected the Islamic Republic’s Account Balance to improve in 2022 reaching 3.8 percent of the Gross Domestic Product (GDP). The figure stood at 3.5 percent last year.