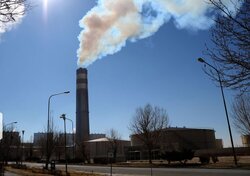 According to Rajabi Mashhadi, the output of the country’s hydropower plants is also at an acceptable level proportional to the current water shortage situation and the electricity demand, IRNA reported.
So far, no systematic blackouts have been imposed across the country in the domestic sectors, Rajabi Mashhadi said.

Increasing the country’s power generation capacity and preventing blackouts during the peak consumption periods have been among the Energy Ministry’s top priorities since the current government administration took office in August 2021.
To this end, the ministry had put it on the agenda to increase the capacity of thermal power plants by 5,300 MW by the current Iranian calendar year’s summer time peak consumption period (starting on June 22), of which more than 3,000 MW has been achieved so far.

Over the past decade, constant temperature rising and the significant decrease in rainfalls across Iran have put the country in a hard situation regarding electricity supply during peak consumption periods.
In this regard, the Energy Ministry has been following new programs to meet the country’s power demand during peak periods and to prevent outages.
Constructing new units in the country’s power plants and also building new power plants for major industries are among the mentioned programs that are being pursued seriously by the ministry in collaboration with other related government entities.