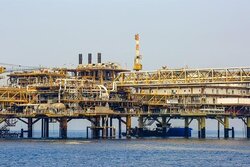 The acting head of the Domestic Production Committee at Iran’s Pars Oil and Gas Company (POGC) said his company is going to domestically produce 19 platform equipment items by the end of the seventh Iranian calendar month of Mehr (October 21), the POGC portal reported.

POGC, which is in charge of developing the country’s giant South Pars gas field in the Persian Gulf, is collaborating with domestic knowledge-based companies to manufacture the mentioned data-x-items of which seven are in the final stages of production, according to Qasem Pour-Zeytani.
Over 45 billion rials (about $165,216) has been invested in the projects defined for the construction of the said equipment, the official said.

According to him, the mentioned 19 data-x-items will save the company about 45 billion rials, and their domestic production is 50 percent cheaper than similar foreign samples.
POGC completed nine projects regarding the domestic production of similar equipment in the previous Iranian calendar year (ended on March 20) which saved the company 61 billion rials (about $223,960), he added.

Pour-Zeytani noted that 27 billion rials (about $99,129) was spent to complete the mentioned nine projects in 1400, which was 70 percent more cost-efficient compared to the imports of similar products from abroad.
“Some of the projects that were completed last year include the production of a portable turbine washing machine and the personnel transport basket, have been carried out for the first time in the country, and the rest have been the first experiences of Pars Oil and Gas Company in this field, which is very important,” he explained.

He further noted that POGC is also in talks with domestic knowledge-based companies for the production of 16 more data-x-items and added that the projects for the production of the mentioned 16 data-x-items have been targeted to be completed in the next Iranian calendar year.
Domestic production of oil and gas industry equipment has been always among the objectives of the Iranian Oil Ministry. However, the issue became further highlighted since the re-imposition of the U.S. sanctions and Washington’s determination for cutting off the Islamic Republic’s ties with the world advances in knowledge and technology, especially in the oil and gas sector.

Back in January, Oil Minister Javad Oji said domestic producers are currently supplying over 70 percent of the oil and gas industry’s needed equipment, adding that this figure can increase to 95 percent.