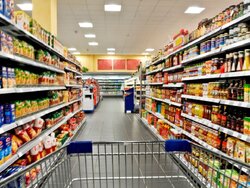 As announced by Iran’s Government Trading Corporation (GTC), more than 2.556 million tons of basic commodities, including wheat, rice, sugar, and oil, have been distributed throughout the country since the beginning of the current Iranian calendar year (March 21).

As announced by the deputy head of Islamic Republic of Iran Customs Administration (IRICA), 30.9 million tons of basic goods worth $19.6 billion were cleared from the customs in the past Iranian calendar year.
Foroud Asgari, the deputy head of IRICA for customs affairs, said that the imported goods were in 25 commodity groups.

Putting the value of the imported basic commodities at $19.6 billion in the past year, the official said that the imports show a 60-percent rise in worth and 32-percent growth in weight, as compared to the Iranian calendar year 1399.

Commodities worth $589m traded at IME in a week

Over 250,000 tons of basic goods cleared from Chabahar port in 2 months