Nearly 1.3m tons of commodities traded at IME in a week 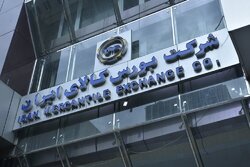 During the past Iranian calendar week (ended on Friday), 1.291 million tons of commodities worth more than $323 million were traded at Iran Mercantile Exchange (IME).

As reported by the IME’s Public Relations and International Affairs Department, the exchange traded on its metals and minerals trading floor 1.181 tons of commodities valued at more than $229 million.
On this floor, the IME's customers purchased 966,853 tons of cement, 161,048 tons of steel, 23,000 tons of sponge iron, 16,000 tons of iron ore, 9,900 tons of aluminum, 4,320 tons of copper, 450 tons of zinc, 150 tons of molybdenum concentrate and 24 tons of precious metals concentrate.
Furthermore, the IME saw trade of 103,235 tons of commodities on both domestic and export pits of its oil and petrochemical trading floor valued almost $86 million.

The IME traded in its physical market 7.231 million tons of commodities with a total trading value of more than $2.378 billion during the past Iranian calendar month Farvardin (ended on April 20), the first month of Iranian calendar year.

Last was the IME's side market on which the exchange traded 110,781 tons commodities.
As previously reported, the value of trades at Iran Mercantile Exchange rose 102 percent, and the volume of trades at the exchange increased 128 percent in the past Iranian calendar year 1400 (ended on March 20), which was the highest level of growth in the history of the exchange since its establishment.