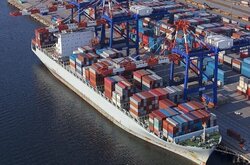 The value of trade between Iran and the United States reached $15 million in the first three months of 2022, to register a 55-percent rise year on year.

Based on the data released by the United States Census Bureau, the two countries traded $9.7 million worth of goods in the first quarter of 2021, Tasnim news agency reported.

According to the mentioned data, Iran exported $4.7 million worth of commodities to the U.S. during Q1 2022, registering a drastic increase of 4,700 percent.

The Islamic Republic imported $10.3 million worth of goods from the U.S. in Q1 2022.
The amount of trade between Iran and the United States is not significant compared to the two countries' total trade with the world. Iran ranks 175th among the U.S.’s top export destinations in the mentioned period while the country occupied the 161st among the U.S. sources of imports.