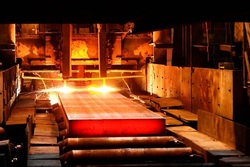 According to the report of public relations of IMIDRO, 14 major Iranian steelmakers exported 4,937,000 tons of steel products indicating a 22 percent growth compared with the corresponding period of the last year.

During the eighth month of the Iranian calendar which known as Aban (October23-November21, 2021), Iranian steelmakers exported 684,000 tons of steel products, up 7% YOY.