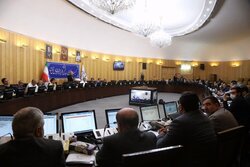 Explaining the Tuesday evening meeting of the Talfiq Committee, Rahim Zare, said, “The members of the committee agreed with the general policies of the 1402 budget bill through holding 10 meetings.

President Ebrahim Raisi submitted the administration’s draft of the national budget bill for the next Iranian calendar year to the Majlis on January 11.

The president mentioned stable economic growth, people’s livelihood, observing justice, and efficiency of the government system as the main approaches of the budget bill and stated: “In this bill, the establishment of a progress and justice fund in all provinces is foreseen so that the development credits of the provinces are paid systematically.”

Raisi also said, “We have included the important points considered by the Leader in the general policies of the Seventh National Development Plan (2022-2026) in the drafting of the 1402 budget bill.”

As reported, reforming the budget structure, creating transparency, attracting governmental and private sector investments for completing semi-finished projects, and implementing the government's integrated financial management system are highlighted in the budget bill for the next year.

The bill has estimated the government’s budget at 21.64 quadrillion rials (about $54.1 billion).

Public resources are estimated at 19.84 quadrillion rials (about $49.6 billion).

The crude oil income is predicted to be 6.03 quadrillion rials (about $15.075 billion), and oil sales are estimated at 1.4 million barrels per day at an average price of $85.

Like the current year’s budget, the next year’s proposed budget requires the government to pay 40 percent of its oil, gas, and gas condensate revenues to National Development Fund (NDF).