Cooperation between Iran, Syria free zones to be boosted 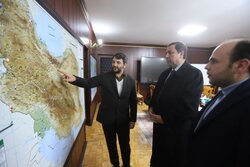 Hojatollah Abdolmaleki, the secretary of Iran’s Free Zones High Council, has said cooperation between the free trade and special economic zones of Iran and Syria will be expanded, IRNA reported.

“Regarding the cooperation of the free zones, technical and specialized correspondence between the two countries has already been carried out and the agreements are nearing finalization,” Abdolmaleki said on Wednesday, in a meeting with Syrian Ambassador to Tehran Shafiq Dayoub.

According to Abdolmaleki, Iran is currently focusing on the expansion of cooperation with Syria’s Hassia Free Zone and the two sides are working together to implement a memorandum of understanding (MOU) signed in this regard.

In this meeting, the Syrian ambassador also welcomed the idea of signing cooperation MOUs with Iranian free zones and said: “The officials of the two countries are unanimous in this regard.”

In late December 2022, Dayoub said his country was determined for the expansion of economic cooperation with Iran.

“The Syrian government is ready and determined to strengthen bilateral relations in all areas,” the envoy said in a meeting with Mohammad Hosseini, Iranian vice president for parliamentary affairs.