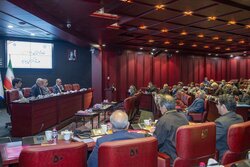 The 90th meeting of the dialogue council of the government and the Tehran Province’s private sector was held on Wednesday, in which ways of facilitating the presence of Iranian companies in global markets were reviewed.

The meeting was attended by Governor-General of Tehran Province Alireza Fakhari and TCCIMA Head Masoud Khansari, as well as the representatives of the province’s private sector, the portal of Tehran Chamber of Commerce, Industries, Mines, and Agriculture (TCCIMA) reported.

During the gathering, the government and private sector representatives also discussed issues and challenges faced by industries and economic enterprises in foreign markets.

Speaking at the meeting, Fakhari emphasized the significant role of the private sector in the country’s economy and considered government interventions in the market and the economy to be acceptable only in the field of policy-making and supervision.

He called on the private sector to be more active in developing export and entering new markets in different countries.

He further emphasized the important role of the TCCIMA as a major representative of the country’s private sector and said: “The Tehran Chamber of Commerce can provide the government with the necessary advice to facilitate the activities of the private sector and cover the weak points of the country's economy with feasibility studies and by promoting active diplomacy in other countries.”

Khansari for his part welcomed the viewpoints of the newly appointed governor-general of Tehran Province and expressed hope that with his participation in the dialogue council, the problems and obstacles facing economic enterprises will be resolved.