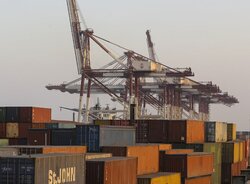 That exceeded the full-year volume for 2021 of around 1.4 billion euros, but remains a fraction of total exports from Europe's largest economy, which reached 1.38 trillion euros in 2021.

In a meeting between Head of Iran Chamber of Commerce, Industries, Mines and Agriculture (ICCIMA) Gholam-Hossein Shafeie and Chairman of the Board of the German Federal Association for Economic Development and Foreign Trade (BWA) Michael Schumann in Tehran in last July, the two sides discussed ways of expanding economic relations between the two countries.

In the meeting, Shafeie criticized German government’s restrictions on issuing visa for Iranian businessmen, saying that facilitation of visa issuance is a prerequisite for the expansion of trade ties between the two countries.

Stating that Germany has always been Iran's first trade partner in Europe, the ICCIMA head said: “After the nuclear deal, Germany was the first country to restart relations with Iran and the volume of trade between the two sides increased by 60 percent in a short time. But after the withdrawal of the U.S. from the JCPOA, the volume of economic exchanges between Iran and Germany decreased by 50 percent.”

He further praised Germany’s efforts for maintaining economic ties with the Islamic Republic and said: “I hope your visit can help activate the commercial capacities of both sides further. Especially with the new situation and the war in Ukraine, cooperation between Iran and Germany can have good results for our region and Europe.”

Shafeie further pointed to the automotive, agriculture, and education sectors as attractive fields for cooperation between the two sides, saying:” We are becoming the hub of automobile manufacturing in the region and we need new technologies in agriculture due to droughts and limited water resources.”

The official noted that ICCIMA is seeking to establish an office in Germany, adding "We are doing our best to increase the volume of trade with Germany. Fortunately, the conditions are better than in the past and it is possible for the delegations to meet in person. I hope that the next meeting of the two countries’ joint economic committee will be held as soon as possible to help the development of trade between the two sides.”

Schumann for his part stated that currently, 1,300 people from different companies and research institutes in Germany are members of BWA, saying: “Our goal is to find emerging markets across the globe. This association helps German companies to find business partners in the world and supports international companies to operate in Germany.”