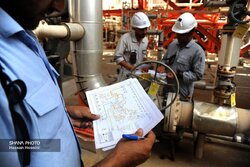 Head of Iranian Petroleum Industries Equipment Manufacturers Association (known as SIPIEM) has said over 17 percent of the country’s knowledge-based companies are active in the oil, gas, and petrochemical sectors, Shana reported.

The official noted that more than 40 percent of the knowledge-based companies active in the oil, gas, and petrochemical sectors are members of the SIPIEM.

“These companies are responsible for about 10 percent of the financial turnover of the country’s all knowledge-based companies,” he added.

Organized by Bandar Imam Petrochemical Company, the "Development of relations with knowledge-based and technological companies" conference was held on Saturday.

In a meeting with some officials of the country in April, the Leader referred to the motto of this year and called the oil-free economy a long-term goal, saying that at least two governments in eight-year responsibilities must work to solve this problem (reliance on oil income).

In line with materializing the motto of the year, Oil Ministry and all of its subsidiaries have announced strong determination and prepared plans to this end.

Oil Minister Javad Oji has said, “We will increase oil production and reduce the import needs of the oil industry by relying on the power of knowledge-based production”.

“At the Ministry of Oil, we called in five areas so that we could use the potential of knowledge-based companies to increase production. Low-efficiency wells and optimization of fuel consumption in collecting gases, import needs of the ministry, and the chain of petrochemical complementary industries are among these areas”, the minister said in late April.

“During the short time that this government has been established various exhibitions of knowledge-based companies have been held, which I believe that they have a very good potential in both the upstream and downstream sectors”, Oji further reiterated.

“According to the order of the Leader, the industry should become knowledge-based; it is possible, and we have started the work in this due”, the oil minister noted.

“Also, with our call, very good and capable companies came forward, and the new formats of contracts we have designed will motivate these companies for cooperation”, he added.

The managing director of National Iranian Oil Company (NIOC), the main subsidiary of Oil Ministry, has also said that the main priority of the oil industry in the present year is increasing oil production relying on the knowledge-based approach.

Emphasizing that knowledge-based production will be at the forefront of the industry's plans, the official said: "Creating sustainable job opportunities while increasing production will definitely be a basic necessity and strategy that must be considered."

National Iranian Gas Company (NIGC), the other major subsidiary of Oil Ministry, also plays an important part in materialization of the motto of the year.

As Majid Chegeni, the managing director of the company, has said, the activity of the gas industry is directly related to the issues of production and employment; because almost all industries in the country are dependent on gas energy, so the role of the NIGC personnel is highlighted in this due.

National Petrochemical Company (NPC), another main subsidiary of Oil Ministry, is completely familiar with the knowledge-based concept, and plays a significant management and development role in moving in the way of progress through a new and technological view, as stated by the managing director of the company.

In a meeting with the NPC directors and experts on materializing the slogan of the year, Morteza Shahmirzaei said the concept of knowledge-bases is familiar to the whole large family of petrochemical industry and the units have had very good activities in this field due to their area of responsibility.

“Many equipment and catalysts of the petrochemical industry are being fully domestically-produced relying on the internal technical know-how, and we should eliminate the need to import them due to the existing capacities in the country and relying on our domestic capability”, the official stressed.