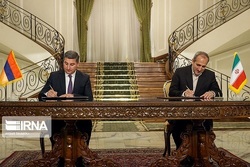 Iran and Armenia signed a memorandum of understanding (MOU) on energy cooperation in Tehran on Tuesday.

Based on the MOU, signed by National Iranian Gas Company (NIGC) Head Majid Chegeni and Armenian Minister of Territorial Administration and Infrastructures Gnel Sanosyan, the two sides agreed on extending a previous agreement on swapping gas for electricity by the end of the Iranian calendar year 1409 (March 2031).

Based on this MOU, according to the increase in the volume of exported gas, the electricity swap coefficient will also be modified, Chegeni stated.

Currently, Iran exports one million cubic meters of gas to Armenia, which will double, the official added.

The renewed MOU was signed on the sidelines of the visit of Armenian Prime Minister Nikol Pashinyan, on the head of a high-ranking delegation, to Tehran on Tuesday.

During the meeting, the two sides reached an agreement to expand and develop the International North-South Transit Corridor in the Iranian territory from Nordoz border to Varzeqan and Tabriz.

According to Qasemi, with the addition of a new Iran-Armenia section to the International North-South Transit Corridor (INSTC), from Nordoz border to Varzeqan and then Tabriz, the capacity of moving goods and transit through INSTC will be significantly improved.

Elsewhere in the meeting, Qasemi expressed Iranian companies’ readiness for the exports of technical and engineering services to Armenia.

Addressing the press after the talks with Qasemi, Sanosyan for his part invited Iranian companies to participate in his country’s development projects and announced his country’s readiness for the beginning of the construction of Armenia’s Kajaran Tunnel in the spring of 2023 with the participation of Iranian contractors.

Emphasizing that he has a mission from the prime minister of his country to announce that Armenia is ready to entrust the project to Iranian contractors without holding any tenders, he explained: “We are trying to build the Kajaran Tunnel in the spring of 2023 in collaboration with Iran.”

During an Iran-Armenia business forum hosted by the Tehran Chamber of Commerce, Industries, Mines and Agriculture (TCCIMA) in mid-September, the attendees underlined the significant position of Armenia as Iran’s only land gateway for entering Eurasian Economic Union (EAEU) markets.

Speaking at the forum, Godari stressed Armenia’s unique geopolitical situation among Iran’s neighboring countries and said: “Armenia is the only EAEU member with which Iran shares a land border, and considering the fact that the country’s borders with Azerbaijan and Turkey are currently closed, Armenian market has a lot of potential for Iranian businessmen.”

Over the past year since the 13th government has taken office, nine rounds of negotiations have been held between Iran and the Eurasian Economic Union, and issues related to the implementation of a Free Trade Agreement (FTA) between the two sides have been resolved, Godari said.

“The negotiations are in the legislative stage and will be finalized within the next few months,” he announced.

Stating that in the last two years, numerous Iranian company representatives and business delegations have visited Armenia, Godari said: “The market of this country has a big difference with some neighboring countries; in Armenia, products are imported from many countries all around the world, so, Iranian products have to compete with world-class products.”

Elsewhere in the event, Yarijanian pointed to the positive relations between Iran and Armenia and stated: “In the last 30 years, the diplomatic relations between the two countries and given that Armenia shares Iran’s only land border with the Eurasian Economic Union, the development of relations with this country provides enormous economic potential.”

Also in early September, Head of Iran’s Trade Promotion Organization (TPO) Alireza Peyman-Pak hosted a meeting with Armenia’s Deputy Economy Minister Narek Teryan in which the officials talked about a variety of areas for economic cooperation between the two countries.

Iran and Armenia had also signed an MOU at the end of the two countries’ 17th meeting of the Joint Economic Committee in Yerevan in mid-May.

The MOU, which covers cooperation in areas of transit, transportation, facilitation of exchange of goods, energy, development of environmental cooperation in Aras area and removal of pollution from border rivers, as well as medical tourism, was signed by Iranian Energy Minister Ali-Akbar Mehrabian and Armenian Deputy Prime Minister Mher Grigoryan, who are the chairmen of the two countries’ Joint Economic Committee.

In that meeting, which was attended by a large number of deputy ministers, senior officials, ambassadors, and members of parliament of the two countries, the main issues that play a key role in the development of relations between the two countries were discussed.

According to the officials, the purpose of holding the 17th meeting of the Iran-Armenia Joint Economic Committee was the real and tangible development of relations between the two countries.

Among the issues raised at the meeting were transit, transportation, facilitation of trade, and broader cooperation in the field of energy.