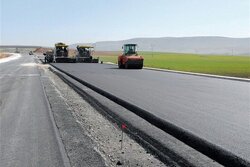 The managing director of Construction and Development of Transportation Infrastructures Company (CDTIC) said on Sunday that 39 road construction projects are going to be inaugurated across the country by the end of the sixth Iranian calendar month of Shahrivar (September 22), IRIB reported.

The official noted that the inauguration of the mentioned projects is going to reduce road accidents by 70 percent because turning roads into four-lane highways will eliminate many transport-related risk factors.

“Regarding the development of the country's transportation infrastructure, both in the railway and in the freeway and highway sectors, some good measures have been taken in the past year; some projects were put into operation so far and some will be ready for operation by the end of Shahrivar,” Khademi said.

He stated that over the past year, 129 kilometers (km) of freeways have been constructed across the country which will hopefully be put into operation by yearend (March 20, 2023).

Pointing out that in the highway sector, about 551 km of highways and 184 km of main roads have been constructed, the CDTIC head said that more than 237 kilometers of the mentioned highways and main roads will go operational in 16 provinces by late September.

According to the official, over 49.52 trillion rials (about $172.9 million) has been invested to construct the said 237 km of roads.

Iranian Transport and Urban Development Ministry managed to add 440 km of freeways and 1,200 km of highways to the country’s road network in the previous Iranian calendar year (ended on March 20).