New opportunities to be created for coop. between Iran, Japan in car industry 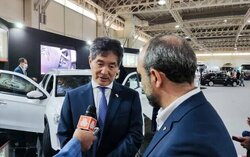 Given the amicable and friendly relations existing between Iranian and Japanese automakers, Japanese Ambassador to the Islamic Republic of Iran Kazutoshi Aikawa said that if sanctions are removed, new opportunities will be created for cooperation between Iran and Japan in car industry.

Speaking in his visit to the Auto Industry Development Exhibition in Tehran, he said that he familiarized with the salient progress and advances made in Iranian market, especially in its auto industry.

He then pointed to the manufacturing of electric vehicles and new pickups which were displayed at the exhibition and appreciated salient measures taken by Iranian automakers in this field.

Elsewhere in his remarks, the Japanese envoy described Iran’s market ‘profitable and lucrative’ and said that there are a lot of opportunities for all automakers of the world in the Iranian car market which is very promising.

He then expressed hope that sanctions imposed against Iran would be removed as soon as possible.

In the end, the Japanese envoy to Iran pointed to the diversity of cars produce at SAIPA Automotive Group and said that the Group has high potential to produce high-quality cars in different classes.

The diversity and models of car manufactured in SAIPA Automotive Group is high.