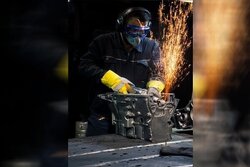 He called the improvement of production process at aluminum casting hall as one of the challenges of achieving goals of aluminum parts’ production and supply of parts for SAIPA Automotive Group, he said, adding that reducing wastes and production period have also been taken into serious consideration in production growth of the aforementioned parts.

The CEO of Malleable SAIPA Company said that his company owes production increase of aluminum parts to the unflinching and nonstop efforts of industrious workers and experts working at the Aluminum Casting Hall and also other production and headquarters departments of the company.
Materialization of objectives behind the production increase of aluminum parts is the result of precision and accuracy of expert engineers and relentless efforts of operators and also other employees of the company working in its production hall which led to eye-catching improvements and achieving objectives of producing high-quality products and consequently production growth in this industrial and production unit.

Malleable Company was established in October 1965 for manufacturing all casting parts and various kinds of metal products. Executive operations lasted until March 1969 and the company came into operation from April 1969.