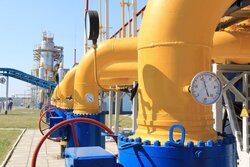 "We have collected close to four billion dollars of gas revenue for the first four months of the year, which is nearly as much as what was collected for the entire previous year," ISNA quoted Oji as saying.
The Oil Ministry has previously announced that it has been able to collect funds from earlier energy exports and reached an agreement to resume gas supplies to Iraq in April as Baghdad paid part of its debts owed to Tehran.
Iran mainly exports gas to Turkey and Iraq but the sales have not always been consistent due to debt-payment issues, domestic consumption needs, and occasional technical problems which forced a momentary halt in exports to Turkey over the winter.
Earlier this month, National Iranian Oil Company (NIOC) announced that the Oil Ministry fulfilled 70 percent of its revenue-generating obligations in the first three months of the current Iranian calendar year (March 21-June 22).

Despite the restrictions caused by the sanctions, the sale of crude oil, gas condensate, as well as petroleum products, and natural gas is ongoing and the revenues from it are being collected, NIOC Financial Director Mohammad Rousta said.
Earlier in May, Ali Forouzandeh, the director-general of the Oil Ministry’s Public Relations Department, announced that the country’s income from the export of oil, gas, petroleum, and petrochemical products rose 66 percent during the first two months of the current calendar year (March 21-May 21).