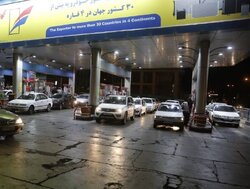 According to Afshin Mahdavi, the director of planning at National Iranian Oil Products Distribution Company (NIOPDC), daily gasoline consumption in the country stood at about 87 million liters in the previous year’s same four months.
NIOPDC has also distributed, on average, 107.6 million liters of diesel every day during the mentioned period, Mahdavi said.

Having a production capacity of nearly 120 million liters per day of gasoline, Iran currently has also the capacity to store three billion liters of the strategic fuel.
Although the Islamic Republic is currently self-sufficient in gasoline production, fluctuations in consumption at different periods through the year have led to the creation of storage facilities across the country to manage the sustainable supply and distribution of gasoline.

These tanks will help the country’s refineries continue operating at full capacity if on certain days of the year (such as the Nowruz holidays) gasoline consumption rises significantly, and also prevent any interruption in the supply of the fuel if consumption increases drastically.
In this regard, the capacity of the country’s gasoline storage facilities has increased in recent years, so much so that according to the National Iranian Oil Products Refining and Distribution Company, the volume of gasoline storage has increased from 1.8 billion liters to more than three billion liters.