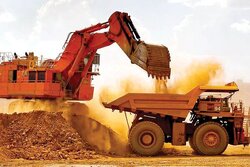 There are more than 15,000 mining machines, which are over 20 years old, in the fleet of mining industries of the country, which need renovation and replacement, according to the deputy, industry, mining and trade minister for mines and mining industries.

Reza Mohtashami said some of these machines can be renovated, but the rest should be replaced through imports.
The liberalization of the import of mining machinery is only limited to machinery that cannot be manufactured inside the country, he stated.

The import of mining machinery without a history of manufacturing inside the country has been liberated without restrictions, and in this way, a good prospect is expected in the mining industry equipment sector in the future, the official said, adding that in terms of the other machines that can be manufactured inside the country, import will not be done.

Having 81 different types of minerals, Iran is one of the top 10 mineral-rich countries across the globe. In this regard, the Iranian government is pursuing several programs for promoting the mining sector as a major contributor to the country’s economic growth.
But despite these programs, this sector is facing several challenges.
According to a report released in the past Iranian calendar year (ended on March 20) by the Research Center of the parliament, the challenges of the mining sector are 44 percent related to laws and the lack of a long and clear mining strategy, 33 percent are related to mismanagement and problems of miners, 13 percent to environmental and natural resources problems, and 10 percent are related to international problems.

Lack of machinery is also a major challenge in the mining sector.
A board member of Iran Chamber of Commerce, Industries, Mines and Agriculture (ICCIMA) has said: “At present, due to the shortage of these machines, purchase prices have skyrocketed and, in addition, their rents have become very expensive. At these prices, it is not profitable for small and medium-sized mines to rent machinery and become active. Finally, the miner has the mine and the raw material, but it is not economical due to the expensive operation of the machinery”.