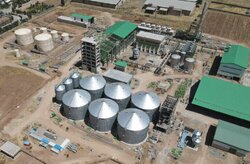 Iran’s first biorefinery, which is the largest such unit in the region, has reached 85 percent physical progress and is in its final stages of construction, Head of Industrial Development and Renovation Organization of Iran (IDRO) Ali Nabavi announced.

Located in the western Kermanshah province, the biorefinery is going to produce bioethanol as its main output product, IRNA quoted Nabavi as saying on Tuesday.
According to Nabavi, despite the limitations and problems created by the U.S. sanctions, IDRO has managed to successfully implement the mentioned project with the help of local engineers and experts.

The construction, installation, testing, and commissioning of this important biorefinery are expected to be carried out and completed in the current Iranian calendar year (ends on March 20, 2023).
The official noted that over 12 trillion rials (about $44.05 million) has been invested in this project which is going to create direct job opportunities for over 200 people.

When fully operational, this biorefinery will have an annual production capacity of 66 million liters of bioethanol which will save the country more than $65 million every year, according to Nabavi.
The refinery will also produce 66,000 tons of fermented meal leftover from the production of alcohol annually as a by-product; this product is currently imported as a valuable livestock feed.