Alumina powder production up 11% in 2 months on year 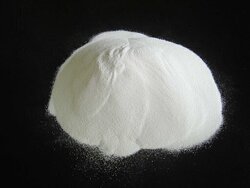 Production of alumina power in Iran rose 11 percent in the first two months of the current Iranian calendar year (March 21-May 21), as compared to the same period of time in the past year, according to the data released by Iranian Mines and Mining Industries Development and Renovation Organization (IMIDRO).

Aluminum oxide, which is commonly called alumina, is an inert, odorless, white amorphous material often used in industrial ceramics.
Alumina is an important ceramic material for industrial applications. The numerous fields of application range from construction materials, to filling materials, as well as abrasives and catalysts.
In plants and mechanical engineering, alumina ceramics are mainly used for wear and corrosion protection.

The particle size distribution largely determines the application range and the quality of an alumina powder. Reliably identifying the differences in particle size is therefore an essential requirement of the measuring instrument.