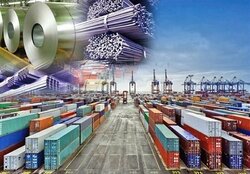 Iran’s export of steel products increased 69 percent during the first half of the current Iranian calendar year (March 21-September 22), as compared to the same period of time in the past year.

Based on the statistics, 1.62 million tons of steel products was exported in the six-month period of this year, while the figure was 960,000 tons in the same time span of the previous year.

As previously reported, over 6.768 million tons of steel products has been produced in the first half of the current year, showing a nine-percent fall as compared to the figure for the same period of time in the past year, which was a result of constant power outages in the country.

In early May, Industry, Mining and Trade Ministry issued a three-month waiver for some approved steel production units to be able to export steel products especially long sections.

The ministry had restricted the exports of steel products and obliged all steel producers to offer their products at Iran Mercantile Exchange (IME).

Iran’s export of steel during the previous Iranian calendar year 1399 (ended on March 20) declined 13.1 percent compared to the figure for the preceding year, data released by the Iranian Steel Producers Association (ISPA) showed.

Based on the mentioned data, over 2.839 million tons of steel products were exported in the mentioned year, registering an 18-percent decline year on year.

As ISPA data indicated, the exports of steel products, intermediate steel, and sponge iron all declined last year, and despite significant output growth and the demand decline in the domestic construction sector, the exports of the mentioned products did not increase due to the pandemic.

Iran is currently the tenth largest steelmaker in the world and is estimated to climb to seventh place by the Iranian calendar year 1404 (March 2025).

According to the latest data released by the World Steel Association (WSA), production of crude steel in Iran reached 17.8 million tons during January-July, 2021 to register a 9.9 percent growth year on year.

The Iranian Steel industry has been constantly developing over the past years against all the pressures and obstacles created by outside forces like the U.S. sanctions and the coronavirus outbreak that has severely affected the performance of the world’s top producers.