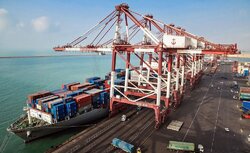 The value of non-oil export from Hormozgan province in the south of Iran rose 47 percent during the first half of the current Iranian calendar year (March 21-September 22), as compared to the same period of time in the past year, a provincial official announced.

Abolfazl Akbarpour, the director-general of the customs office of Shahid Rajaee port (Iran’s major and most-equipped container port located in Hormozgan), said that 16 million tons of non-oil commodities worth $5.861 billion have been exported from the province in the six-month period of this year, indicating 16 percent growth in terms of weight as well.

He mentioned China, UAE, Thailand, India, Oman and Ghana as the main export destinations and iron ore and concentrate, ethylene polymers, mineral and chemical fertilizers as the major exported items.
The official put the six-month non-oil import at 4 million tons worth $9.907 billion, with 73 percent rise in terms of value.

He mentioned China, India, UAE, Italy and Germany as the main sources of imports in the first half.
As announced by the head of the Islamic Republic of Iran Customs Administration (IRICA), the value of Iran’s non-oil trade rose 47 percent during the first half of the current Iranian calendar year, as compared to the same period of time in the past year.
Mehdi Mir-Ashrafi said that Iran has traded 79.1 million tons of non-oil products worth $45 billion with other countries in the mentioned period.

The official further announced that Iran has imported 19.1 million tons of non-oil commodities worth $23.1 billion in the first six months of the present year, with a 37-percent growth in value and a 15-percent rise in weight year on year.
Mir-Ashrafi named cellphones, livestock corn, sunflower oil, barley, meal, wheat, soybeans, sugar, palm oil, and rice as the main imported commodities.

According to the official, out of the total 19.1 million tons of goods imported into the country in the first six months of this year, 14.3 million worth $8.9 billion were basic goods, which constitutes 75 percent of the total imported goods.

The IRICA head has announced that the value of Iran’s non-oil trade stood at $73 billion in the past Iranian calendar year.

Mir-Ashrafi has put the weight of non-oil trade at 146.4 million tons, and said that the figure shows a 25-million-ton annual decline, which is the result of sanctions and coronavirus pandemic.

CBI allocates $1b for import of basic goods