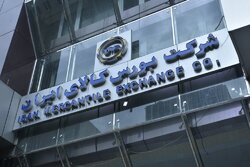 During the past Iranian calendar week (ended on Friday), 1.913 million tons of commodities worth $543 million was traded at Iran Mercantile Exchange (IME), showing 18 percent rise in value and five percent growth in volume of trades as compared to its preceding week.Source: Tehran Times

As reported by the IME’s Public Relations and International Affairs Department, the exchange experienced trade of 1.479 million tons of commodities valued at more than $301 million on its metals and mineral trading floor.

Commodities sold on this floor included one million tons of cement, 329,144 tons of steel, 6,700 tons of copper, 7,250 tons of aluminum, 24 tons of precious metals concentrate, 280 tons of molybdenum sulfur, 100 tons of zinc, 26 kg of gold bars and 19,000 tons of sponge iron.
Furthermore, the IME saw on both domestic and export pits of its oil and petrochemical trading floor 429,560 tons of commodities worth more than $237 million.

Furthermore, the IME saw on both domestic and export pits of its oil and petrochemical trading floor trade of more than 1.65 million tons of commodities worth $885 million.

Last but not least was the IME's side market which was a platform to trade 30,860 tons of various types of commodities in this month.

The value of trades at Iran Mercantile Exchange in the previous Iranian calendar year (ended on March 20) rose 108 percent compared to the preceding year.