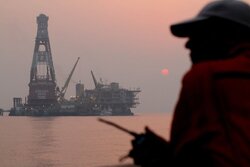 Ahmad Bahoush made the remarks in a meeting of SPGC managers with the head of Pars Oil and Gas Company (POGC) which is in charge of the offshore section of the field, Shana reported.

During the meeting, the officials discussed the necessary measures that should be taken to prepare the complex for a sustained supply of gas during the cold season.

South Pars gas field, which Iran shares with Qatar in the Persian Gulf, is divided into 24 standard phases of development in the first stage. Most of the phases are fully operational at the moment.

SPGC is in charge of the refineries of the complex on shore, while POGC operates the platforms of the field offshore.

Earlier this year, a report published by the Oil Ministry’s Planning Directorate showed that the capacity of Iran’s daily natural gas production exceeded 1,000 mcm in the previous Iranian calendar year (ended on March 20),

According to the report, the country's natural gas production capacity registered the mentioned record for the first time in the previous year when gas production from the South Pars gas field increased by more than four percent compared to the preceding year (1399).

The field is estimated to contain a significant amount of natural gas, accounting for about eight percent of the world’s reserves, and approximately 18 billion barrels of condensate.