Tehran, Astrakhan to cooperate in shipbuilding 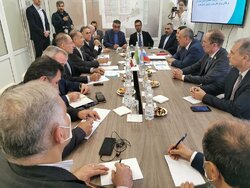 Iranian Ambassador to Russia Kazem Jalali met with Sergey Milushkin, the director-general of Special Economic Zone Lotus in Russia’s Astrakhan on Thursday during which the two sides discussed cooperation in various sectors including manufacturing and overhauling cargo vessels.

As IRNA reported, the meeting was held on the sidelines of Jalali’s visit to the mentioned zone.
Following the meeting, Milushkin said: “We had fruitful negotiations on the construction of ships for Iran [to be used] on the north-south corridor, as well as the participation and investment of Iranian companies in this economic zone.”

The Iranian side is interested in repairing and building ships in this zone and we are ready to cooperate in this field, he stated.
The official also called for the cooperation of Iranian businessmen and companies in the Astrakhan region and said: "[Iranian] Companies can operate here without any restrictions and with special incentives and exemptions."

During the visit to the Lotus SEZ in Astrakhan, Jalali also told IRNA that he visited three major sites in the region, including a safflower processing unit, a factory for the production of infrastructure related to road and airport runways, as well as a huge shipyard for constructing vessels and overhauling them.

“It was also decided that the Russian side would prepare and submit a draft of the facilities that they would grant to the Iranian side, such as bank loans and credit lines for purchasing vessels or establishing joint ventures in the field of shipbuilding,” Jalali said.
During his meeting with Milushkin, Jalali also stressed the need for taking the necessary measures for completing the North-South corridor as soon as possible.

The Russian official for his part, called for the establishment of a single operator among the three countries of Iran, Russia, and India to focus on the issues related to the North-South corridor, and said that in this regard, he will soon have a visit to Iran and then to India.

“If we reach an agreement in 2022, the corridor could be completed a year later,” Milushkin said.
Welcoming the proposals of the Russian side, Jalali emphasized the importance of this corridor and added that many meetings have been held to complete this corridor over the past year.