Motorcycle production up 80% in 9 months yr/yr 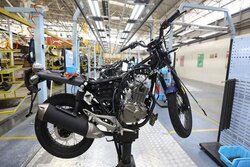 Motorbike production in Iran has grown 80 percent in the first nine months of the current Iranian calendar year (March 21-December 21, 2022) compared to the same period last year, as local manufacturers seek to ramp up exports to neighboring countries.

According to the secretary of Iran’s Association of Motorbike Industry, about 325,000 motorcycles were produced over the nine months period of the current year, IRIB reported.

Bahman Zia’ Moghaddam said that the annual output of motorcycles in Iran is expected to reach over 400,000 units in the current calendar year which ends in late March 2023.

Zia’ Moghaddam earlier said that Iranian manufacturers of motorbikes are struggling with relatively low levels of exports, especially to neighboring countries where affordable Chinese brands have a strong presence in the markets.

He also blamed restrictions on banking transactions because of foreign sanctions on Iran as a major hurdle to expanding exports of motorbikes from the country.

Iran has 56 motorcycle manufacturing companies of which only 30 are fully active. The industry provides permanent jobs to 16,000 people.