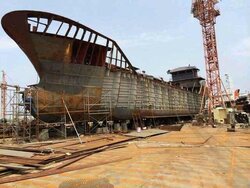 Managing director of Iran Shipbuilding and Offshore Industries Complex (ISOICO) has said domestic knowledge-based companies have great potential for the development of the country’s maritime fleet that should not be neglected, the portal of Ports and Maritime Organization (PMO) reported on Sunday.

“Many countries have put great importance upon the advantages of their sea transportation, while this economic capacity has been neglected in our country despite having 5,800 kilometers of coastline in both north and south of the country,” he said.

According to Zarbi, knowledge-based companies can reduce the gap between Iran’s maritime transportation industry and those of developed countries and create favorable conditions so that the country can benefit from the advantage of this industry in economic development.

He said the Iranian maritime industry needs to enter the shipbuilding arena because restrictions caused by the sanctions have locked down the country's transportation industry and prevented shipping lines from getting new and up-to-date ships.

Pointing out that the world's maritime transport has become a competitive market, he said: “We must transform Iran's maritime industries to be able to compete in global markets in the best way possible.”

“We should consider exporting services and vessels as well to improve our position both at the regional and at the international level,” he stressed.