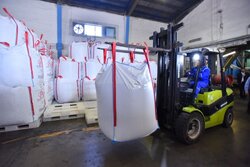 Iran’s petrochemical production in the first nine months of the current Iranian calendar year (March 21-December 21, 2022) has risen seven percent compared to the same period of time in the past year, according to an official in the National Petrochemical Company (NPC).

Bijan Chegeni, the NPC’s director for production control, put the nine-month petrochemical output at 53 million tons, noting that the petrochemical plants operated at 71 percent of their optimum capacity during this period, Shana reported.

According to NPC Head Morteza Shahmirzaei, the company plans to increase its annual petrochemical production capacity to 200 million tons over the next 10 years.

In this regard, Iranian Oil Minister Javad Oji said that more than 100 petrochemical projects with a total investment of about $70 billion have been defined and will be implemented across the country.

Oji noted that the country will also be completely self-sufficient in producing the catalysts used in the petrochemical industry by the end of the current government administration's incumbency (August 2025).

According to Oji, over $12.5 billion was earned from the export of petrochemical products in the previous year.