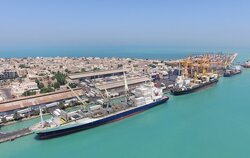 The value of export from the ports of Bushehr province, in the southwest of Iran, rose 67 percent in the first five months of the current Iranian calendar year (March 21-August 22), as compared to the same period of time in the past year, a provincial official announced.

Mehdi Safavi, the director-general of the province’s Industry, Mining and Trade Department, said that over 12 million tons of products worth over $6.3 billion were exported from the ports of Bushehr province in the said five-month period, indicating also 10 percent growth in terms of weight.

He named gas condensate and petrochemical products as the major exported items, and China, the United Arab Emirates (UAE), India, and South Africa as the main export destinations of the products in the five-month period.

As previously announced by Behrouz Qarehbeygi, the director-general of the province’s customs department, the value of export from Bushehr province rose 67 percent in the past Iranian calendar year 1400 (ended on March 20), from its preceding year.

He put the value of export from the province at $10.136 billion in the past year, and the weight of exported commodities, including gas condensate, at 25.78 million tons, with six percent growth year on year.

The official further announced that 25.506 million tons of non-oil goods, excluding gas condensate, worth $9.9 billion were exported from Bushehr province in the previous year, showing 73 percent and six percent annual rise in terms of value and weight, respectively.

He named petrochemical products, gas condensate, minerals, fisheries, and vegetables as the main exported items, and China, the United Arab Emirates, India, Pakistan, Turkey, South Africa, Nigeria, Brazil, Mozambique and Qatar as the major export destinations of the province’s products in the past year.

The head of the Islamic Republic of Iran Customs Administration (IRICA) has announced that the value of Iran’s non-oil exports reached $20.924 billion in the first five months of the current Iranian calendar year, up 21 percent compared to the last year’s same period.

According to Alireza Moghadasi, Iran exported 44 million tons of non-oil commodities in the mentioned five months which was 3.5 percent less than the figure for the previous year’s same period, IRNA reported.

Meanwhile, some 14 million tons of goods valued at $21.665 billion were imported into the country, indicating a 19-percent rise in terms of value compared to the last year’s same time span, he said.

The weight of the imported goods declined by 8.5 percent, year on year, the official added.

In total, the Islamic Republic traded about 58 million tons of non-oil goods worth $42.589 billion with its trade partners in the first five months of the current Iranian calendar year, up about 23 percent in terms of value.

Iran's top export destinations during this period were China, Iraq, United Arab Emirates (UAE), Turkey, and India, according to Moghadasi.

The country’s top five sources of imports during these five months were the UAE, China, Turkey, India, and Russia.