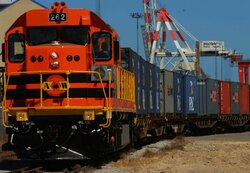 The budget bill for the next Iranian calendar year 1402, which starts on March 21, has allocated 310 trillion rials (about $775 million) to Transport and Urban Development Ministry.

Of the mentioned figure, more than 150 trillion rials (about $374 million) is allocated to the Construction and Development of Transportation Infrastructure Company (CDTIC) to complete railway and freeway projects.

President Ebrahim Raisi submitted the administration’s draft of the national budget bill for the next year to the Majlis on Wednesday.

The president mentioned stable economic growth, people’s livelihood, observing justice, and efficiency of the government system as the main approaches of the budget bill and stated: “In this bill, the establishment of a progress and justice fund in all provinces is foreseen so that the development credits of the provinces are paid systematically.”

Raisi also said, “We have included the important points considered by the Leader in the general policies of the Seventh National Development Plan (2022-2026) in the drafting of the 1402 budget bill.”

As reported, reforming the budget structure, creating transparency, attracting governmental and private sector investments for completing semi-finished projects, and implementing the government's integrated financial management system are highlighted in the budget bill for the next year.

The bill has estimated the government’s budget at 21.64 quadrillion rials (about $54.1 billion).

Public resources are estimated at 19.84 quadrillion rials (about $49.6 billion).

The crude oil income is predicted to be 6.03 quadrillion rials (about $15.075 billion), and oil sales are estimated at 1.4 million barrels per day at an average price of $85.

Like the current year’s budget, the next year’s proposed budget requires the government to pay 40 percent of its oil, gas, and gas condensate revenues to National Development Fund (NDF).

The budget bill for the year 1402 is printed and distributed among the members of the parliament after its presentation and they will have 10 days to submit their proposals and reviews on the budget to relevant specialized committees.

Specialized committees will also have 15 days to submit their reviews to the parliament ad hoc budget review committee (known as Talfiq Committee).

Talfiaq Committee is a body consisting of MPs from different committees which is established each year to study the national budget bill.