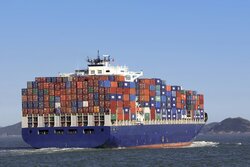 The value of Iran’s export to Qatar is expected to rise to $1 billion within two years, the vice chairman of Iran-Qatar Joint Economic Committee announced.

Khorshid Gazderazi said, “Given the satisfactory results obtained as a result of Iranian trade delegation's trip to Qatar, Iran's exports value to this country is expected to increase to $1 billion within the next two years.”

Opening of Iran's trade center in Qatar at the initiation of Iran’s Trade Promotion Organization (TPO), appointment of Iran's economic adviser in Qatar, visiting economic capacity of Qatar including Hamad Free Zone were of the main achievements gained in the visit of Iranian trade delegation to Qatar, he added.
Back on June 6, Iran and Qatar inked a memorandum of understanding (MOU) at the end of the two countries’ eighth Joint Economic Committee meeting in Doha to outline avenues for future cooperation.
The MOU was signed by Iranian Energy Minister Ali-Akbar Mehrabian and Qatar’s Minister of Commerce and Industry Sheikh Mohammed Bin Hamad Bin Qassim Al-Thani who co-chaired the committee meeting.

Speaking at the eighth meeting of the Iran-Qatar Joint Economic Committee, Mehrabian emphasized the Iranian government's approach to developing international relations and said: "Considering our good relations in the past, this meeting should be a new chapter in the development of cooperation between the two countries."
“We hope to see a significant increase in interactions with the agreements reached in this meeting,” he added.

"One of the most important goals of the meeting is to support the Iranian and Qatari private sectors, and we are happy to see that a large conference with the participation of Iranian businessmen is being held in Doha at the same time as the meeting of the joint committee," Mehrabian said
According to the official, eight MOUs on food, medical industry, knowledge-based companies, etc. were also signed between businessmen of the two countries on the sidelines of the mentioned meeting.

The Iranian energy minister noted that Iran and Qatar have set financial goals for 2023 and hope to see doubled economic relations and trade balance between the two countries.
Meanwhile, in the same day, Iran Chamber of Commerce, Industries, Mines and Agriculture (ICCIMA) and Qatar Chamber of Commerce and Industry also signed an MOU to form a Joint Economic Council.

The document was signed by Sheikh Khalifa bin Jassim Al-Thani, Chairman of the Qatar Chamber of Commerce and Industry, and his Iranian Counterpart Gholam-Hossein Shafeie in Doha.
In the signing ceremony, Al-Thani hailed the formation of the council that makes up of elites of different economic sectors of the two countries.
He said that the council will help discover investment opportunities in both countries and develop mutual cooperation.

The Qatari official stressed the importance of the positive role that the private sector can play in developing trade between the two sides.
Shafeie, for his part, announced Iran’s willingness to boost trade ties with Qatar and said that there are numerous grounds for cooperation in this regard.
In another event held on the sidelines of the two countries’ Joint Economic Committee meeting, TPO Head Alireza Peyman-Pak held talks with the private sector representatives of the two countries to discuss trade related issues and challenges.

Speaking in that meeting, Peyman-Pak expressed the Iranian government’s determination to fully support Qatari traders and investors who decide to do business in Iran.
“Holding joint meetings between businessmen and private sectors of the two countries is one of the issues emphasized by the governments of Iran and Qatar, and both countries are working to establish stable trade relations,” he said.