Commodities worth $413m traded at IME in a week 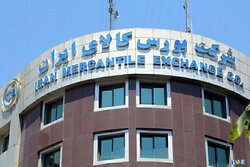 During the past Iranian calendar week (ended on Friday), 1,894,368 tons of commodities worth $413 million were traded at Iran Mercantile Exchange (IME).

As reported by the IME’s Public Relations and International Affairs Department, the exchange traded on its metals and minerals trading floor 1.685 million tons of commodities valued at almost $260 million

The IME also traded within the same week 6,034 tons of commodities on its side market.
As previously reported, 8.849 million tons of commodities worth more than $2.2 billion were traded at the IME during the past Iranian calendar month Khordad (ended on July 22), the third month of Iranian calendar year.
The exchange saw on both domestic and export pits of its oil and petrochemical trading floor, trade of 1.121 million tons of commodities valued at more than $784 million.
The IME's customers purchased on this floor 201,350 tons of vacuum bottom, 275,059 tons of bitumen, 316,753 tons of polymeric products, 148,500 tons of lube cut, 161,706 tons of chemicals, 4,605 tons of sulfur, 13,456 tons of oil, 110 tons of argon, 1,000 tons of slops wax and 755 tons of insulation.